THE UNREPEATABLE HISTORY OF
FLAVOURED SALMON

In 1960, when he was only 17 years old, a young man from Madrid named José Mestanza set course for the Asturian rivers, which would be the starting point of a dream. A dream that consisted of fusing the texture and freshness of the salmon in its rivers with the magic of the noblest woods to create a smoked salmon so subtle and delicate that it brings to mind highly luxurious scents.

Courage and passion were the key ingredients that, after a very long period of time dedicating great effort to his passion, enabled him to find what he was so longing for: a unique smoked salmon.

Unique due to its astonishing delicacy, its special aroma and its infinite smoothness, which climaxed with a final dance of nuances in the mouth. This is why the smoked salmon from Ahumados Domínguez –under that name it began to be marketed under in honour of his mother’s surname– was proclaimed an indisputable delicatessen of the time.

It wasn’t long before this master recipe gave a new meaning to the word flavour, while becoming an essential part of the tables of Spanish haute cuisine. 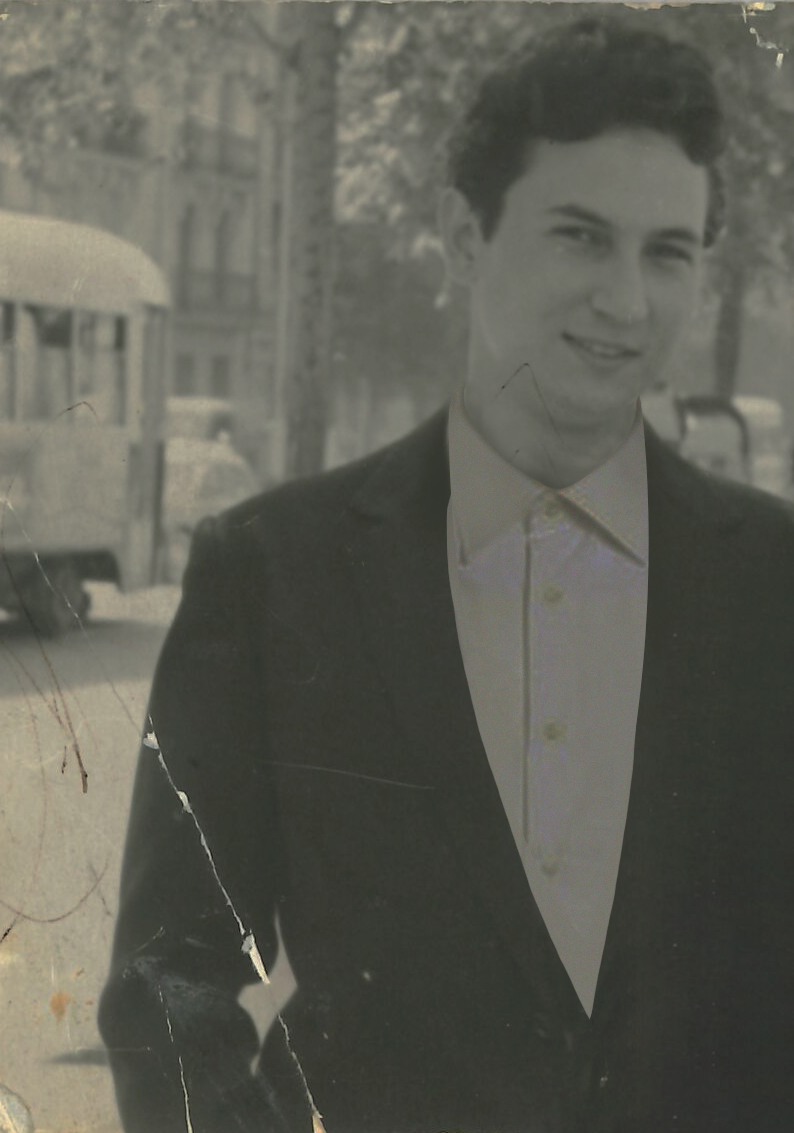 The smoking recipe created by José Mestanza has remained intact and has been guarded with the utmost secrecy during these 60 years. Throughout this trip, while his smoked salmon earned its place within haute cuisine, Ahumados Domínguez grew as a family, rather than as a company, keeping intact the unbreakable values with which it was founded: completely manual production and maximum quality.

Today, three generations later, the smoked salmon from Domínguez still conserves all its essence and is considered, in terms of its flavour, as unique and different, not only in Spain, but in all the countries where it is marketed.

Nowadays, Domínguez smoked salmon has been proclaimed as one of the jewels of gastronomy and consumers can easily distinguish it with their sight and palate.

Although it has evolved and grown over several decades, in this house we continue to make each salmon as if it were the only one of the day, because only in this way can we offer the indisputable guarantee that its logo conveys.

Its desire for continuous improvement is what enabled this house to remain a benchmark for innovation in the sector, not only in terms of developing new products, but also due to being pioneers and agile in the marketing of new formats, cuts and presentations. This is how Domínguez continuously caters to trends and adapts to consumer tastes.

Today, Ahumados Domínguez is formed by more than 200 specialised professionals and markets its products in three continents. In Spain it has nine self-managed stores in different
El Corte Inglés stores and a Smoked Salmon Corner in the mythical Mercado de San Miguel in Madrid. 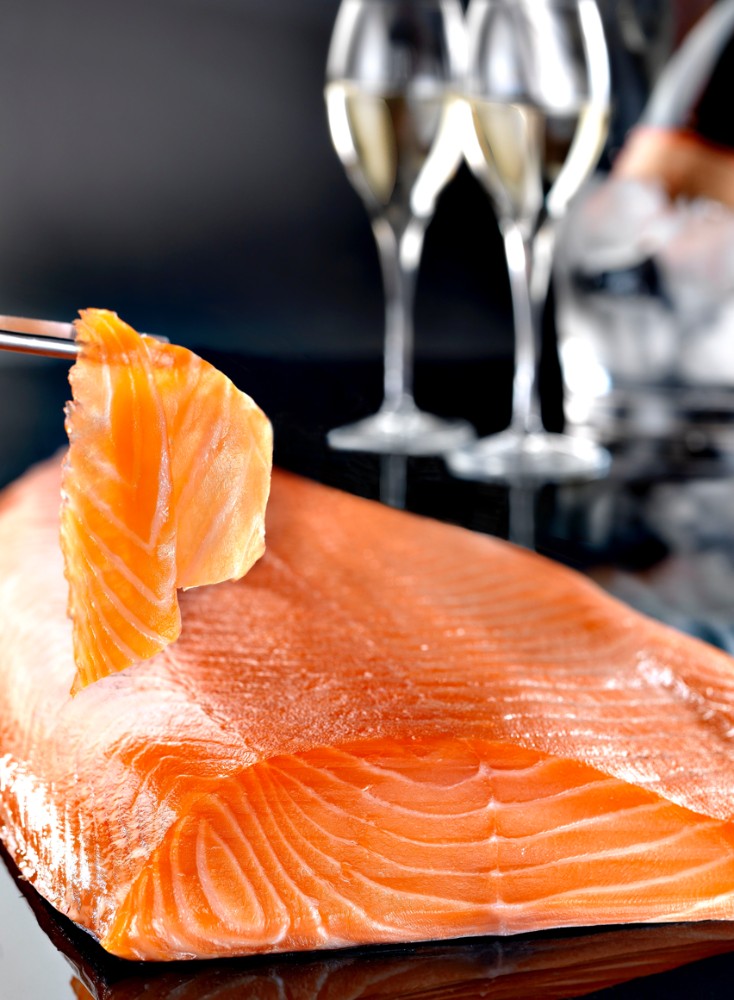 The formula for making our smoked products has remained intact for three generations in the Domínguez family; and today it continues to be a secret that only three people in the house know.
A secret that contains the details of the true essence and great value of Ahumados Domínguez: our flavuor.

A taste that is born from the fusion between an exceptional raw material and meticulously selected woods, passing through the magic of authentic manual processing, in which each piece is treated as if it were unique, with the utmost care.

FLAVOURED, RATHER THAN SMOKED

Because of its delicacy and the lightness of its nuances, true experts in haute cuisine call it “flavoured salmon”, rather than “smoked salmon”.

A JEWEL OF GASTRONOMY

Today, thanks to the fact that we have maintained all the values with which we were born and the passion with which we make our products, Domínguez is considered one of the jewels of gastronomy. 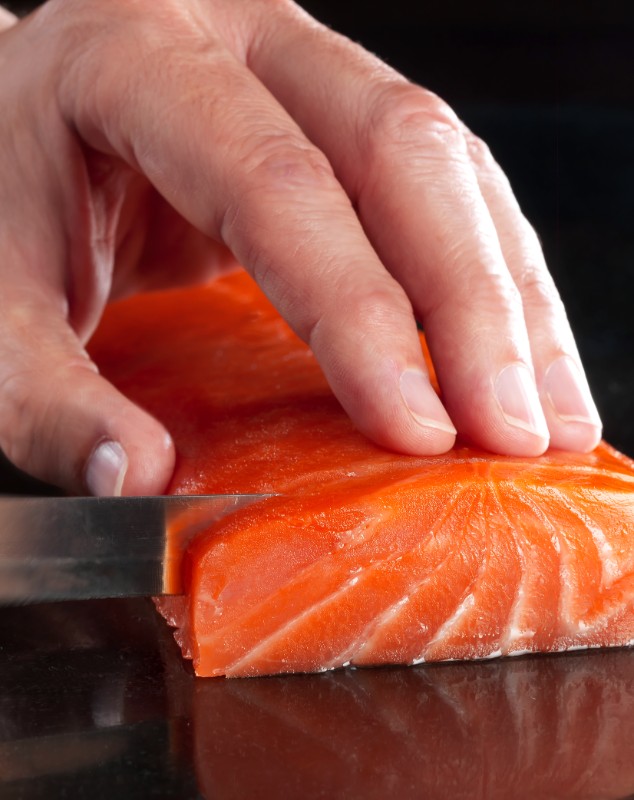 MUCH MORE THAN JUST A GASTRONOMIC EXPERIENCE

Ahumados Domínguez’sboutique-shops are exclusive gastronomic spaces with an unparalleled selection of smoked products and a customised service that matches the quality of the products they offer.

Each of them features a special 360º gastronomic consultancy service, which includes aspects ranging from the selection of the product to its cut with a knife, including suggestions of delicious recipes made with smoked products. The customer also has the option of purchasing the amount they want from the entire variety of products offered by the house, which include: our anchovies and special sardines seasoned in vinegar, smoked cod in three different varieties of oil, assorted smoked products in thin strips for hot recipes, including blinis, and our three varieties of fresh sauces.

Truly unique spaces in which to enjoy the full Domínguez flavour and in a completely customised way. 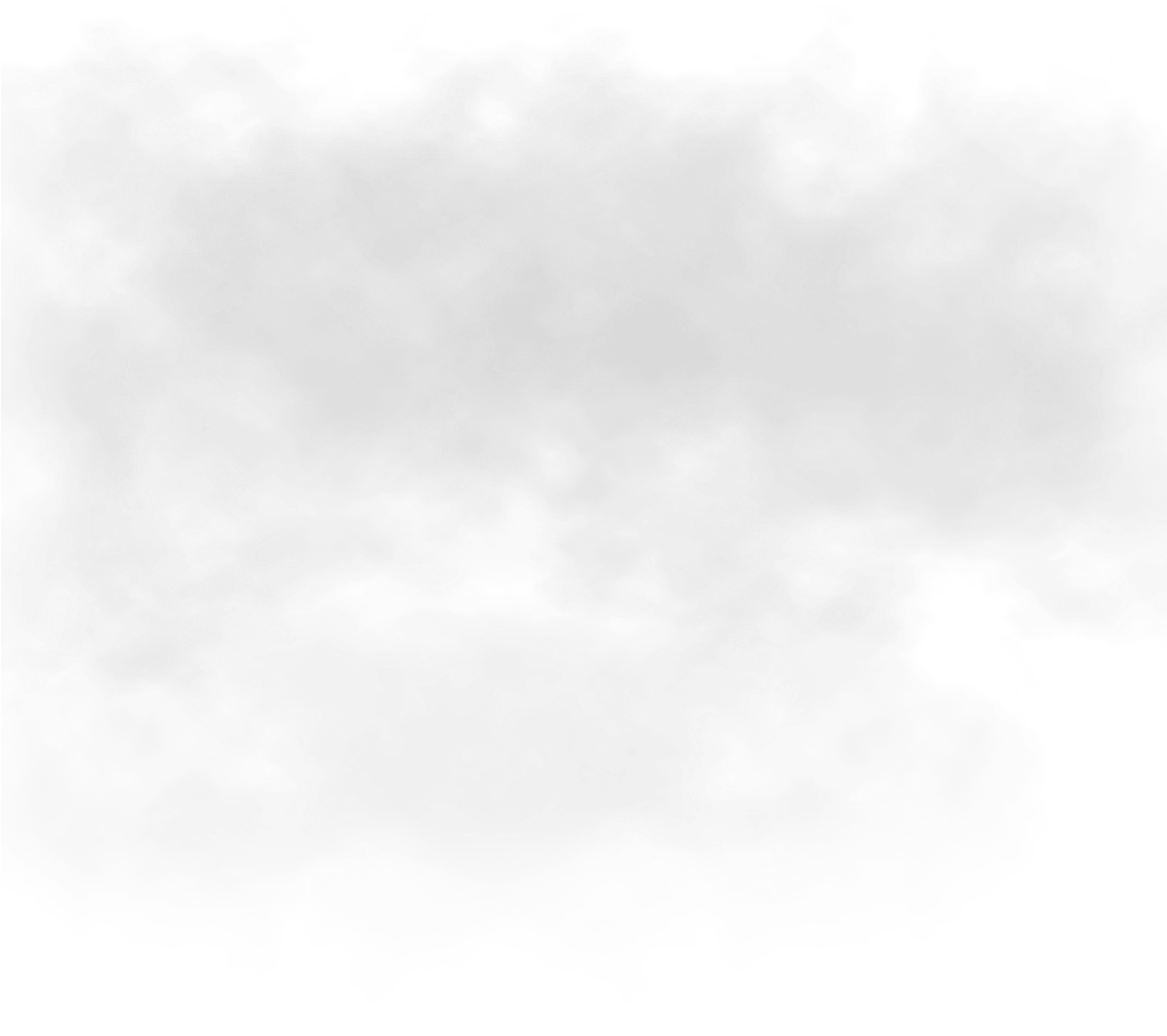 A unique concept in the world to offer up to 19 different elaborations based on smoked salmon in the same space. Located in the emblematic San Miguel Market in Madrid, The Smoked Salmon Corner has an unparalleled selection of freshly prepared snacks that are perfect for any time of day. From its juicy bagel, to its famous varied tapas and the special smoked salmon sashimi, these are just some of the international recipes that Domínguez creates every day.

In addition, with its exclusive show cutting service, its master cutters prepare the best slices of smoked salmon, cut there and then, which the customer can personalise with their fresh toppings.

An innovative and unique gastronomic experience located inside one of the most important historical buildings in Spain. 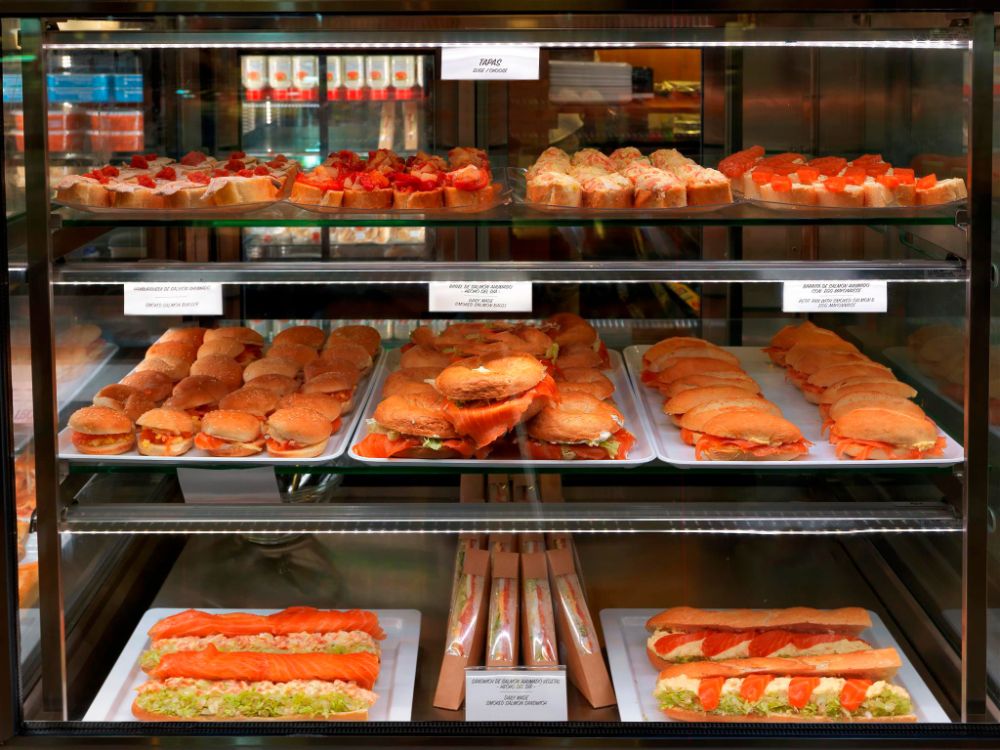 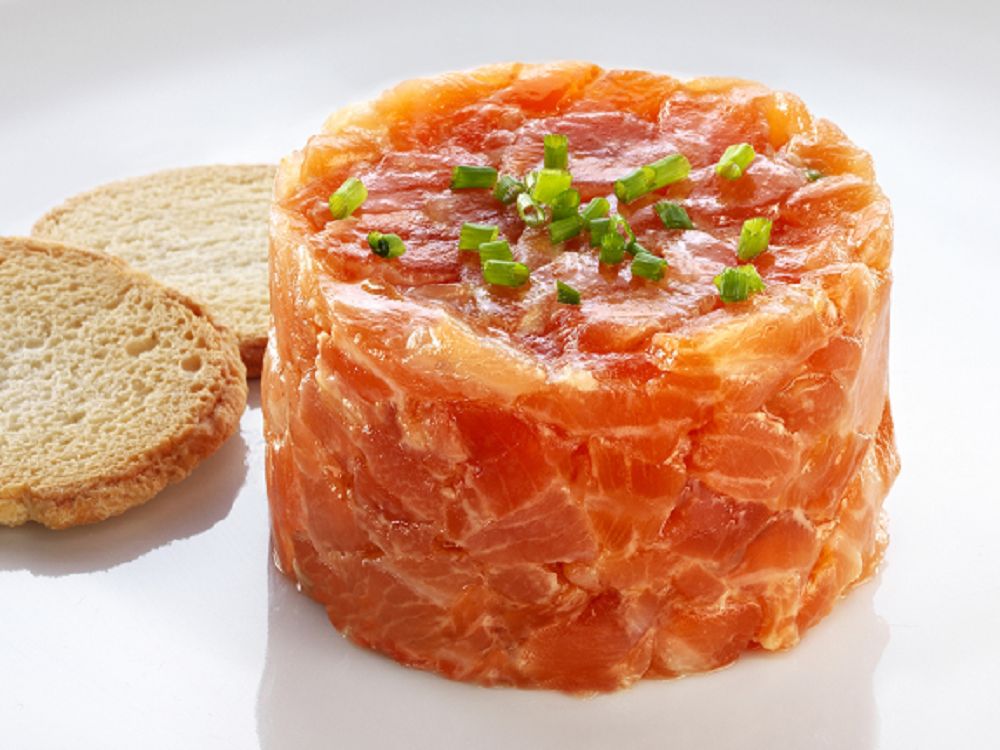 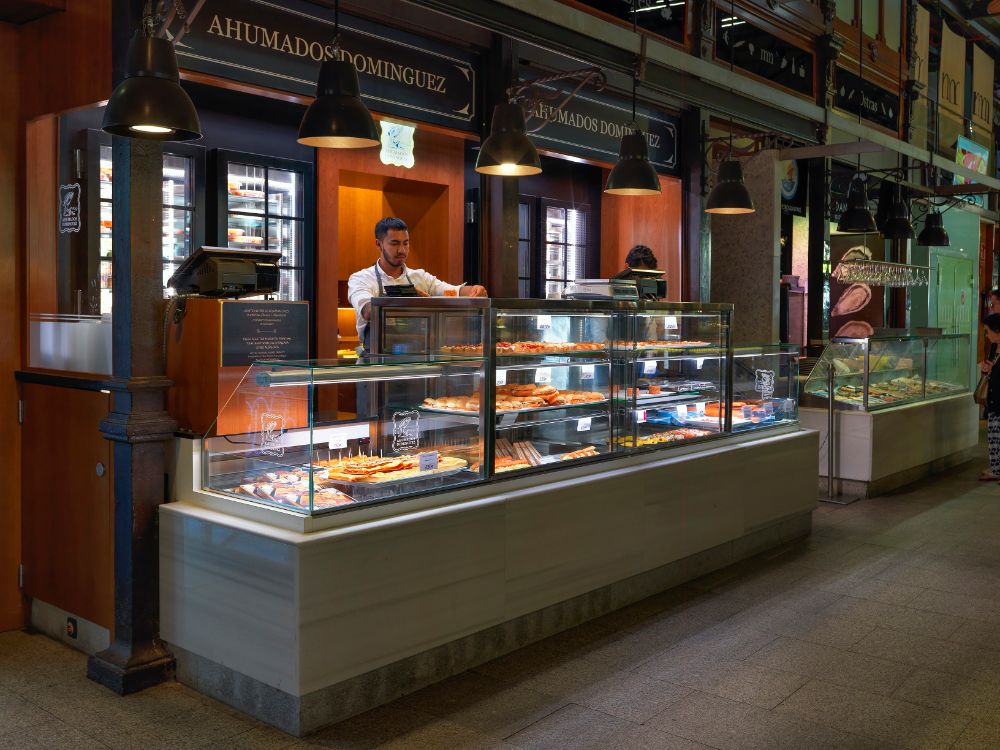 Seeking perfection in every detail

Ahumados Domínguez began its history in 1960, going on to become Spain’s pioneering smoked salmon company. A large part of its current value rests on preserving its traditional smoking method.

The essence of the company is experience

Innovation has marked the history of Domínguez, it is in our DNA

A true delicacy which is best eaten on its own, in order to enjoy all of the flavour

We bet on the winning horse: supreme smoked salmon by Ahumados Domínguez, from fish weighing up to 13 kilos, carefully raised for 14 months, 100% handcrafted.

Aroma of salmon at Ahumados Domínguez